Yikes — No Ice Cream in Mexico?! 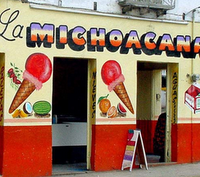 Now let’s be fair, here — 20 percent of the desserts in Texas also tested positive for coliform. But they had on average only 2000 bacteria per gram.
The take-away here is that it’s not enough to follow the usual precautions and avoid drinking tap water and eating fresh fruits and vegetables that haven’t been peeled. You can get travelers diarrhea from desserts, too, especially those served cold or at room temperature. Food served hot is usually safe.
What kind of desserts carried the critters, you ask? The authors don’t get real specific, but they do warn against ice cream, and generalize their conclusions to ice cream served in all developing countries. On the other hand, they didn’t test ice cream made by major commercial manufacturers, so that may be fine. Since one of my favorite things on earth is the Fresas con Crema served in the La Michoacana chain ubiquitous all over Baja and on the Pacific Coast, I choose to consider it perfectly safe.
Tags: FoodhealthMexico