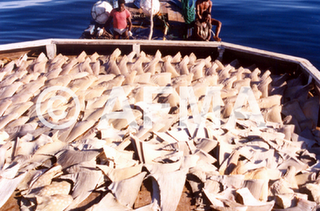 Here on the Nicoya Peninsula in Costa Rica, where I’m spending a blissful few days, the health of the ocean is key. I just heard about an enormous controversy raging here; it’s about shark finning in the area around Cocos Island. Shark fins are a delicacy popular in China and other Asian countries as an ingredient in shark fin soup.

Sharkfinning is a despicable practice; fishing boats scoop up the sharks in enormous long-line nets, slice off their dorsal fins, then toss the fish back into the water where they die a slow, cruel death because they’re unable to swim without this fin.
The backstory is the rise in popularity of shark fin soup, which used to be a rare delicacy served only to royalty and nobility. The rise of the middle class in China has brought this dish in the reach of the enormous and rapidly growing middle class; in some cities a bowl of shark fin soup can be had for $10. Of course, being able to serve this dish so cheaply requires that shark fins be purchased cheaply and in bulk — hence the burgeoning sharkfinning industry.
The law says fishing is restricted within a certain radius around Cocos Island and other popular fishing areas, but the laws are difficult to enforce. Here’s a sad video showing the practice occurring in violation of these laws on the Sea Is Our Sanctuary blog. The great news is that Costa Rica has introduced a new law, though it is still not as restrictive as many people would like. Rather than banning sharkfinning altogether, the law requires that the shark be killed outright and the entire shark be used. In practice, this may make it less financially advantageous to fish for sharks, which would be a big step.
In certain areas such as Toronto, the controversy around shark finning has become a political rallying point. Many organizations, including tourism officials in Costa Rica, are working to raise awareness. Let’s get the word out so everyone is upset, and everyone feels motivated to do something about it. Like enforcing laws — and not eating shark fin soup!
Tags: adventure travelCosta Ricaeco-travelgreen travel