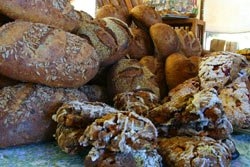 I pride myself on knowing the best purveyors of various delicacies throughout the northern San Francisco Bay Area; it’s a natural outgrowth of my combined love of eating fresh, straight-from the farm food, and my obsession with finding small, family-owned businesses deserving of recognition. But I’ve been to Bodega Bay many, many times and never discovered Spud Point Crab Company, for the simple reason that unlike the vast majority of Bodega Bay businesses, it’s not located right on Highway One but on a side street. So when my brother-in-law turned up at our weekend vacation house with a story of finding a crab shack where you selected your catch from among a pot of crabs so fresh they were still kicking — and pinching — I had to check it out.

Sure enough, Spud Point Crab Company is one of those places I want everyone to know about. But first, let me retrace my steps. 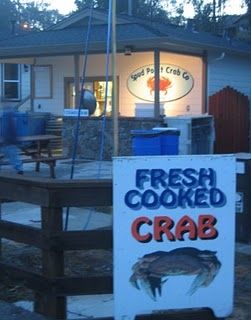 When I go anywhere north-west of Petaluma, I route myself through Freestone, a tiny town off the Sebastopol-Bodega highway on the way to Occidental. The reason: I will go miles and miles out of my way for the bread, scones, and sticky buns on offer at Wild Flour Bread, a tiny organic bakery that’s one of only a handful of businesses in this tiny town. Baked in a brick oven over eucalyptus wood coals, this bread rivals the best bread anywhere in the world. Just as impressive is the philosophy of owner and master baker Jed Walach, who does not ship or wholesale because he wants the staff to meet with customers personally. The bakery opens at 8:30 a.m. and sells bread and baked goods until 4 p.m. or they run out, whichever comes first. (Often the latter.) The enormous organic garden is filled with sunflowers, raspberries, green onions, and other fruits and veggies that they use in the bread, and you’re welcome to take your coffee or chai and scones and sit at one of the tables tucked among the vines.

The selection includes a number of favorites made everyday, and often an experimental flavor or two. Everything baked at Wild Flour is made with their own sourdough starter. I’ll let their descriptions of some of my favorites speak for themselves:

The special recipes can be an adventure in themselves. One of Saturday’s scones, called “mounds,” was a bear claw-like concoction of chocolate, coconut, and almond paste. They were so good we stopped by a second time on the way home to see if they’d made more. (They hadn’t, but they had espresso, one of my all-time faves, instead.)

Okay, back to the crab. So we’d picked up a cheese fougasse at Wild Flour, which we served as an appetizer. This isn’t just any fougasse; it’s potato, garlic, and rosemary stuffed with cheddar, jack and swiss cheeses. This was followed by crab cakes made from Spud Point crab and grilled pork loin seasoned with fresh rosemary we found growing in the garden. The result was a locavore feast that would have made Michael Pollan proud, over which we lingered toasting our family with red wine grown and bottled just 20 miles inland.

Next post In Portland, Even the Food Is Progressive