In Portland, Even the Food Is Progressive 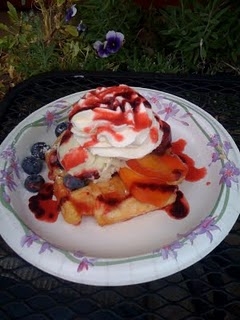 Did I say I love Portland? It’s one of those places with such a unique look and feel, you could magically transport there, land on any street corner, open your eyes and instantly know you were in Portland. I don’t know if it’s the perennially rain-washed streets, the cool, glinty, water-laden air, the weathered clapboard arts and crafts bungalows, the ubiquitous aroma of roasting coffee beans, or the plethora of bicycles, graffiti, and hiking boots, but Portland is just Portland, deeply and unapologetically. 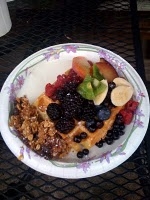 Some Portland favorites stand the test of time (Powell’s), others turn up new and untried with each visit. This time it was southeast Portland that was brimming with new discoveries; in fact, streets like Belmont, Hawthorne, and Division rival north Berkeley’s “gourmet ghetto” for the sheer number of internationally influenced eateries opening up or in some cases expanding from previous hole-in-the-wall locations. One such is the “Waffle Window,” which opened in 2007 around the corner from beloved cafe Bread & Ink on Hawthorne. (Chef Mary, the “waffle woman,” is wife to Bruce, owner of Bread & Ink.)

Studying the menu, it was almost impossible to choose (locals gathered around us, each calling out a favorite, when they realized it was our first visit.) But in the end we had a granola, yogurt and fresh fruit combo and a new offering known as Summer Bliss, which featured tree-ripe local peaches, Chester berries, and fresh berry coulis, topped with homemade lemon verbena ice cream. See photos; need I say more?