Living Lightly on the Central Coast 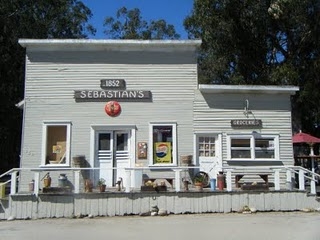 There are all kinds of trips, and sometimes what you most need is a getaway in the deepest sense of that word. To get away from every aspect of your normal routine and try something a little different. Treebones Resort, at the southern end of Big Sur, is the kind of place you can do that and then some.

Our room, if you can call it that, was a canvas-sided yurt big enough to hold two double beds, a couch and two papasan chairs, a dining set, and a ping pong table. (Yes, a ping pong table. And we did play.) All the cabins at Treebones are yurts, which are round tents on platforms modeled after the portable housing used by nomadic desert tribes. But “these aren’t going anywhere,” as owner Corinne Handy assured me, laughing. She was explaining that stormwatchers — people who love to ride out the drama of a big storm — have discovered that Treebones’ yurts are a particularly exciting place to be when a Pacific winter front rolls in. Another attraction: the “nest,” a woven hideaway of twigs (pictured above) with a stunning view of the sea and a soft mattress from which you can watch the sky through the wind-tossed branches.
Treebones, which opened five years ago, has become a destination all its own; most visitors come for a few days of off-the-grid restoration, rather than using it as an overnight stop on the typical central coast roadtrip. When we were there, our fellow guests were notably early risers (the yurts are not soundproof), saddling up for bike rides, heading out on day hikes, or joining kayaking expeditions.
The main restaurant serves an eclectic menu united around a farm-to-table theme; guests order in advance from a selection of entrees that are planned based on what’s fresh in the resort’s organic garden down the hill. But the big hit is the brand new outdoor sushi bar, which opened two months ago and draws a devoted crowd who come for the sunset view but linger well past the official closing hour tasting sake and sharing tall tales. 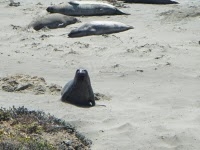 Fresh from the garden is also the philosophy at hidden gem Sebastian’s tucked into the old part of San Simeon near the historic pier where the Hearsts originally unloaded ships laden with European treasures bound for the castle. While Hearst Castle may symbolize capitalist excess in the extreme, Sebastian’s recalls the humble life of the dockworkers who served the famous family. Sitting out on the sunny weathered deck, decorated with old tools, pots full of trailing flowers, shells, and other accumulated treasure, I found myself thinking about how riches are in the eye of the beholder. The staff at Sebastian’s are clearly determined to pack more into a sandwich than seems physically possible; my Big Sur veggie was more than five inches thick and a rainbow of colors.
From San Simeon we went just a couple of miles south to the Piedras Blancas elephant seal rookery, where local volunteers from Friends of the Elephant Seals gave the gauping tourists an elegant lesson in marine biology. I, for one, had no idea that once elephant seal pups are weaned, their parents head to feeding grounds in Alaska (males) and Hawaii (females) and leave them to fend for themselves. The juveniles left behind didn’t seem particularly stressed, I have to say, but one lone adult female gave us what for when she thought we were getting too close.
We finished our day with homemade ollalieberry pie from Linn’s in downtown Cambria and a walk along the boardwalk that borders Moonstone Beach. The pie, made from local berries, was no more vivid than the sunset colors over the Pacific.
Family Travel Tips
Big sur
Tags: adventure travelBig SurCambriaeco-lodgingeco-travelfamily travelSan Simeon

Next post Rows of Empty Beach Chairs Line Ixtapa/Zihua Beaches: Are They Calling to You?