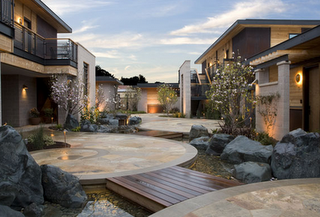 The Napa Valley is known the world over for wine making and grape growing, but oddly, it’s never been a particularly environmentally enlightened region. For one thing, growing grapes requires a great deal of water and — unless they’re organic — quite a lot of pesticides, too.  Not to mention that the sheer number of visitors makes for a steady and air-clogging stream of cars bumper to bumper on the valley’s few primary roads. And Napa Valley culture, an awkward meld of generations-old viticulture dynasties and arriviste deep-pocketed gentleman farmers, can be slow to change and accept new ways.

So it happens that “green” (and, of course, greenwashed) travel has come late to the party in Napa. And now it’s interesting to watch one of the earliest and most popular outdoor-oriented destinations rush to play catch-up. The three-year-old Gaia Hotel, for example, was the first LEED-certified gold property in the U.S., and newer resorts like Solage and the Silverado Resort have put in place all sorts of environmentally friendly initiatives. (At Solage, for example, the room service waitstaff tool around the property on bicycles.)

The latest arrival on the Napa Valley scene, Bardessono Hotel, isn’t so much catching up, as surpassing rival properties. One of only a handful of hotels in the U.S. reaching for platinum LEEDS status, Bardessono is green through and through, from the rammed-earth walls and recycled materials it’s built from to its state-of-the-art energy system, fed by 900 solar panels and 82 geothermal wells, that produces so much energy last year they had to sell some of it back to PG&E.

Developer Phil Sherburne, who grew up on an Oregon dairy farm and was a semi-famous student organizer in the 1960s, has earned plenty of green cred for his efforts.  Robert Redford was one of the first celebrity guests, and Toyota used the hotel’s conference facilities to launch the new redesigned Prius. 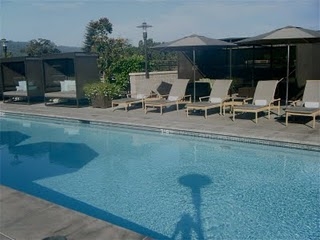 But the main reason to come to Bardessono is that it’s just plain gorgeous. Built on and taking its name from one of Yountville’s prime agricultural homesteads, the ranch farmed for generations by the sprawling Bardessono family, this luxury boutique hotel and spa is laid out in such a way that guests spend almost every waking moment outdoors. The rooms, which are clustered in separate pod-like buildings, are designed for almost complete privacy; you honestly don’t have to see your fellow guests if you’d prefer not to. (A lure for celebs, I’m sure.) And the gardens are laid out in an airy, pseudo-Zen fashion with rock-tiled paths meandering between stone-lined streambeds. Among the many water features is a Stonehenge-like fountain that’s eerily breathtaking at night.

The restaurant, which serves a surprisingly reasonable prix-fixe four-course dinner on Sundays that’s attracting locals as well as guests, does farm-to-table cuisine with all the attention to freshness and herb-infused flavor it deserves. And the spa — all I can say is, it’s worth it to pay a little extra for the vinotherapie massage, which features light, aromatic Chardonnay grapeseed oil and leaves you limp as a rag but greaseless enough to hop straight in the pool. Which, with its enormous enclosed, pillow-strewn cabanas reminiscent of a seventies Middle Eastern-themed restaurant, is phenomenal, by the way.

To get to Bardessono, head north on Highway 29, the Napa Valley north-south artery, and exit at Washington Street.