Three Days in Tuscany an Hour from Home

Harvest time in the Italian countryside functions as a collective fantasy; we all share the same longing for that iconic vine-encrusted, ochre-colored Tuscan barn set amid golden fields. Of course, the one larger image is in fact a collective of smaller, more disparate images: A round-shouldered squash, a bottle of red wine, a round of briny cheese, a rustic plank table. We immediately picture ourselves sitting down to a hearty lunch under a grape arbor. 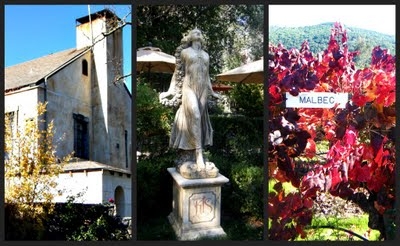 But Italy’s a long way away, budgets are tight, and we have our own golden hills and harvest-tinted countryside just 40 miles up the road. So instead, we found that plank table loaded with wines, cheeses, and other harvest bounty waiting for us in the cozy rustic restaurant at Kenwood Inn and Spa.

Every detail at Kenwood Inn and Spa is so perfectly “Under the Tuscan Sun” that you find yourself asking an oddly unnerving question: If it feels authentic, why not call it authentic? The sun-dappled statues, vine-shaded courtyards, and gnarled black fig, pomegranate, and persimmon trees certainly seem to be straight out of a Bolognese villa.

In fact, Italian tradition is such a hovering presence at Kenwood that the first thing we did upon arrival was watch a demonstration of the one-of-a-kind hand-built pasta machine that Kenwood owner (and engineer) David DiLoreto designed himself in an attempt to recreate this mother’s flavorful handmade pasta. 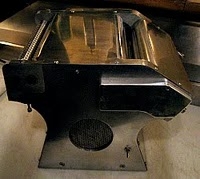 The restaurant at Kenwood Inn is open only to guests, and the country Italian menu developed by chef Renzo Veronese is so beloved that the food is some guests’ primary reason for returning time and again. I would make an annual fall pilgrimage myself for the butternut squash ravioli in olive oil with whole leaves of toasted sage, a dish that’s easy to do wrong, and which Veronese does just right.

I also loved the “Flavors of Autumn” wine pairing put together by Kenwood’s new wine director, Ann Davis. The three wines were all from Hop Kiln, which is under the same ownership as Kenwood, a fact that would have made me nervous except I favor Hop Kiln’s traditionally full-bodied oak-y wines. And we learned a lot from Ann’s colorful descriptions of the logic behind certain flavor combinations. (About the match of a 2008 Rosa Bellisima grenache with redskin potatoes stuffed with bacon, onion and gruyere cheese, she says “Why? The wine’s acidity cuts the bacon’s juiciness while complimenting the smoky flavors. Add caramelized onion to bring out the fruit and gruyere from some earthiness.”)

But it’s not just Kenwood that feels straight out of Italy. The organic farms and tasting rooms tucked into the folded, vine-terraced hills of the Valley of the Moon maintain the mood, offering fresh produce and eggs straight from the henhouse at farmstands up and down Highway 12.

And the illusion remained unbroken through out an unbelievably flavorful dinner at Estate Sonoma, the latest offering from Sondra Bernstein, who also owns The Girl and the Fig.

Located in one of the oldest homes in the Sonoma Valley, the high-ceilinged interior of Estate feels like a modernized version of a Victorian parlor; more British or Spanish than Italian. But the food is exactly what you’d expect to be unceremoniously served in that aforementioned Tuscan arbor. Roasted squash topped with chestnut honey and toasted pumpkin seeds; wood-fired brussels sprouts sprinkled with thick chewy chunks of house-smoked bacon; rich, savory meatballs made from ricotta and home-cured pork sausage; a “trio of Italian cheeses” paired with figs, dark cherries, and local almonds. 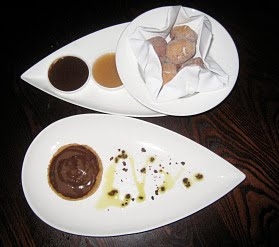 But what really conjured up images of chilly fall nights in Sienna were the desserts: a creamy chocolate tart known as Budino that featured a pudding-like filling inside a shortbread-like flaky pastry crust, and zeppole, an Italian version of beignets, sugar-dusted air-filled pastry balls which you dunk in a choice of two divine dipping sauces, nutella and caramelized apple sauce.

On the romantic drive home through darkened vineyards and swirling mist, it was surprisingly easy to imagine that when we pulled into Kenwood’s circular drive and climbed the stone stairs to our room, the last words said would be “sogni dolce.”

Next post Tis the Spa Season: The 5 Best Spas In Napa and Sonoma