Germs on a Plane: 5 Myths and Truths About Healthy Flying

Is it true you get sick every time you fly, or does it just seem like it? It’s a common belief that planes are germ factories and with every passing minute you spend in the cabin, you’re more likely to get sick. 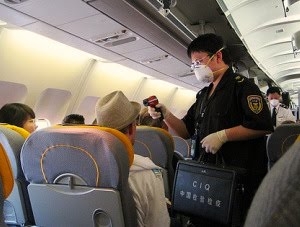 So what’s myth and what’s fact?
Test your knowledge about planes and germs by taking this quiz.


1. True/False: You get sick on planes because of germs in the air system.

False. Actually, the circulating air system is filtered, and as long as it’s on, you’re pretty safe. To protect yourself, turn your vent on all the way and keep it blowing towards your face. That way you’re breathing your own air and not everybody else’s.

2. True/False: Some airline seats are better than others for avoiding the flu.
True. If it’s an older plane, that is. New planes have very effective recirculating air systems, and one seat’s pretty much as good as any other as long as the air’s turned on. But in some older model planes the ventilation systems aren’t strong; in that case, a seat towards the middle of the plane is going to have more moving air.

3. True/False: Sitting on the runway before takeoff is unhealthy.
True.  It’s not the grounding that’s dangerous, it’s the fact that flight staff usually turn off the circulating air system to save fuel. In one case, researchers studied 54 people who were delayed on the ground for three hours because of engine failure before takeoff. Within two days, 72 per cent of the passengers became ill — and the researchers traced the flu strain back to one sick passenger.

4. True/False: It’s illegal for a plane to sit on the runway with the air turned off.
True. Current recommendations require that “passengers be removed from an aircraft within 30 minutes of shutting off the ventilation system,” but the rule isn’t always followed. If you’re on a delayed flight and you notice the air go off, check your watch. After half an hour, remind the flight staff that regulations require that the ventilation be turned on.

5. True/False: The best way to protect yourself from germs in the cabin is to wear a mask.
False. Airborne germs are a concern if there are passengers with the flu coughing right on you. In that case, do try to change seats. But rhinovirus, the most common cause of winter aches and sniffles, is actually transmitted via the hands and physical surfaces. Wash your hands frequently, and disinfect armrests and other surfaces. Wash your hands after using the bathroom and after touching common surfaces such as your tray table.

Don’t touch your nose, whatever you do. And don’t touch your eyes, either; germs can travel through your tear ducts directly into the most vulnerable nasal membranes.

For more information on this topic, check out healthytravel.com. They cover flying and the H1N1 flu and more healthy travel topics regularly.

Next post Following the Sun South to Find Outdoor Adventure

Previous post Tis the Spa Season: The 5 Best Spas In Napa and Sonoma

How to Stay Fit and Healthy When You Travel