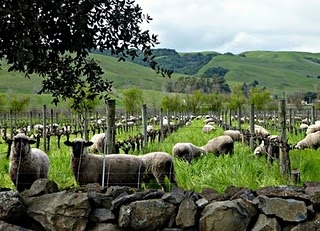 I honor the French Laundry as much as the next farm to table food fanatic. When it opened in 1994, I was travel editor at San Francisco magazine, and practically levitated with excitement when I visited for the first time along with a bunch of other San Francisco staff. But some years ago, when people started to talk about re-christening the town “Kellerville” in acknowledgement of the great chef’s dominance of restaurant row, I began to wonder. After all, as my beloved Julia Child-inspired grandmother used to say, “there’s always room for more cooks in the kitchen.”

So I’m happy to report on new arrival Cantinetta Piero in the just-opened Hotel Luca at the north end of town. And to use this as the occasion to mention again how much I loved the food at Bardessono, which opened last year just off the Washington Street strip, while also touting Farmstead, which just opened (finally!) two weeks ago. And to talk about some other lesser-known happenings in the Yountville food and lodging scene. So, 3 food-related reasons to  plan a getaway to Yountville this spring: 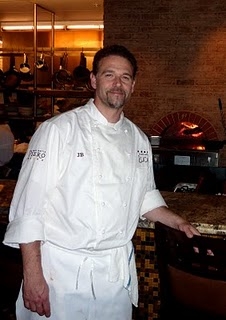 1. Cantinetta Piero
As of today, the newest arrival is Cantinetta Piero, the northward outpost of David Fink, who’s best known for two Carmel favorites, Aubergine and Cantinetta Luca. And in fact, Cantinetta Piero’s kitchen is helmed by chef Jason Balestrieri, who comes up several days a week from his sister restaurant. While Bay Area foodies might chafe at the idea of a top Napa Valley restaurant being run by a part-time out-of-towner, the truth is Balestrieri’s  menu of Italian-inspired dishes nevertheless takes much of its inspiration from local produce, cheese, beef and pork. And I thought his approach was a breath of fresh air – hearty, lively, informal, fun, and anything but pretentious.

Meat is the operative word here, as Balestrieri’s house-made salume is the undisputed star of the show. A plank-laid selection of eight varieties, six of them cured on premises, is a must-eat unless, of course, you’re vegetarian. In which case the local muscles and other seafood are given similarly inspired attention. 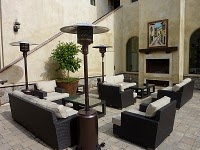 Cantinetta Piero has plenty of modern flourishes tucked within the trappings of tradition. Visitors are greeted at the entrance with a stunning wine display in which choice bottles are framed by striking tile mosaics. One entire wall is made up of floor-to-ceiling sliding glass doors that let in the Tuscan-inspired golden light of the courtyard and in good weather allow the courtyard to be an extension of the dining room. The courtyard also features a Scottsdale-style outdoor fireplace lounge, the perfect place to retire to with your after-dinner drinks.

2. Bardessono
Chef Sean O’Toole is as Irish as his name suggests, hailing from the Boston area. But you wouldn’t know it from his food – just as you wouldn’t know he spent almost 20 years perfecting French cuisine at places like the Ritz-Carlton, Fifth Floor, Masa’s, Alain Ducasse’s Mix, and in France itself. Because the food at Bardessono, located in the ultra-green Bardessono Hotel and Spa, isn’t noticeably French. Nor, despite the hotel’s Italian name (which comes, actually, from the family name of the property’s former owners), is it Italian. 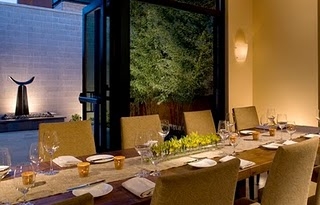 Instead, it’s an eclectic collection of dishes so “locavore” in nature that most are named after the farms, ranches, and oceans from which their ingredients hail. There’s the “Star Route Farm beet salad,” the “Fort Bragg sablefish,” the “Pozzi Napa Valley lamb,” the “Liberty Farm duck,” and the “Marin Sun Farm beef.” Having spent many hours at the Star Route Farm produce stand at my local farmer’s market and having waved at the cows of Marin Sun Farm while visiting Pt. Reyes, I’m touched by the nods to local farm families.

It’s not just the food at Bardessono that feels hip, casual and uber-local, though — the atmosphere in the high-ceilinged dining room is lighthearted and friendly, with a wall of fire flickering at one end, lively bar at the other, and a long family style table along one wall. This spring Bardessono is offering a prix fixe four-course Sunday Supper that’s got to be the deal of the day at $39.

3. Farmstead
Okay, so it’s not in Yountville – but it’s just 12 miles north, between Rutherford and St. Helena,, and well worth ten minutes in the car. The creation of another Irishman, Sheamus Feeley, (formerly exec chef at Rutherford Grill) in concert with the Hall family of Long Meadow Ranch, Farmstead is something special indeed. The expansive property is a full-fledged roadside attraction, with a wine and olive oil tasting room, gardens, a nursery (the old Whiting nursery, still in operation), and a farmstand. 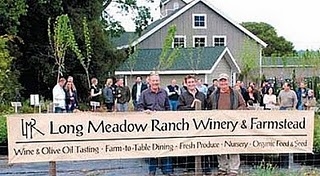 Those who know Napa well are familiar with Long Meadow Ranch for their free-range, grass-fed beef and their organic wine, olive oil, and produce, all of which are showcased at Farmstead. The restaurant itself, though, is Feeley’s baby through and through. Trained at the Rutherford Grill, Feeley is a midwest-raised meat and potatoes kind of guy, and as he told me in a pre-opening interview, his goal is to marry the farm-to-table sensibility with the hearty traditions of comfort food. Farmstead’s menu is rich with warming basics like short ribs, chicken and dumplings, and meatballs with caramelized mirepoix. The cheese biscuits alone are worth the drive north for.

Farmstead doesn’t have a website yet, but you can read updates on the Long Meadow Ranch blog, or just head north on Highway 29; it’s at the first intersection just before you enter St. Helena proper — the one where you always get stuck in traffic on sunny Saturdays.

And a teaser……
In addition, Keller’s longtime companion and recent fiance, Laura Cunningham, opens the much-anticipated Vita this summer after a foundation-to-roof renovation of the old PJ Steakhouse. Vita will specialize in the piquant, flavorful Sicilian and southern Italian fare Cunningham’s grandmother — and the restaurant’s namesake — made at home. And of course, Lord Keller himself never stops moving and shaking, and news is that he plans to add a butcher shop to the Buchon enterprise this spring. Stay tuned.

Previous post Treating Yourself to the Treasures of Tribal Arizona