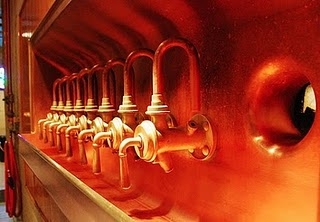 At brand new Social Kitchen and Microbrewery, which opened in the Inner Sunset neighborhood of San Francisco last week, the concept of handcrafted microbrewed beer is getting a dose of “slow food” style refinement. Owner and brewmaster Rich Higgins is chief of the San Francisco Brewing Guild and takes the art of locally made and handcrafted beer very seriously. (This group puts on an annual festival in Golden Gate Park called Slow Beer, just to drive the point home.)

At Social Kitchen, Higgins wants to get patrons thinking in terms of pairing beer with food, just as we do with wine. So in addition to regular stouts and ales, he’s introducing several low-alcohol, food-friendly beers that don’t dominate your tastebuds like most dark brews do. Higgins’ enthusiasm also shows up in plans for  an extensive educational program of beer tastings, brewery tours, and even monthly brewing days where the beer-curious can come observe the brew crew at work. And of course beer-and-food pairing dinners. Want to know what goes well with kolsch? Come find out.

And hey, did you know beer is good for you? The same week I received the announcement about Social Kitchen I was researching osteoporosis and heart disease and stumbled on studies showing that the grains and yeast used to make beer are high in B vitamins and folate. In particular, beer is rich in B6 and B12, now known to fight the buildup of an inflammatory chemical called homocysteine that both saps bone strength and fuels heart disease. And hops, the main ingredient in beer, have long been used as a remedy for anxiety and insomnia. So drink up!

On a local action note, Social Kitchen is actually the sixth brewpub to open — and close– in this space over the past ten years, so let’s wish Higgins well and offer our support.  The newly redone atmosphere is all rustic wood and metal, with a vibe that manages to be both hipster and homey. Chef Rob Lam is finding clever ways to cook with beer; the menu includes beer-batter sweet potato tempura and short ribs braised in ale.

Stay at the Campton Place Taj hotel in Union Square for a central location that makes it easy to get to all the City’s most colorful neighborhoods.

Not quite so new (it opened a few years ago) but still being discovered by those who think San Francisco beer begins and ends with Anchor Steam is 21st Amendment Brewpub on 2nd Street close to the waterfront. Also specializing in Belgian-style ales and stouts, 21st Amendment is above all a friendly, informal place, with a big semi-circular bar that seems to welcome strangers into an already happening party. An open kitchen continues the welcoming atmosphere; the only downside is it can get loud.

Stay at the Hotel Vitale just a few blocks away and you’ll have a pleasant stroll along the waterfront to get back to your bed.

Back on the west side of the city, in fact about as far west as you can go, are the Beach Chalet and Park Chalet brewpubs, located at the westernmost end of Golden Gate Park where the dunes meet the sea. Best known for the history, architecture, and atmosphere of the buildings they’re located in, these brewpubs deserve a nod for their handcrafted beeer as well. Owners Gar and Lara Truppelli take brewing so seriously they provide diagrams and instructions on their websites, so the handmade nature of the process will be fully appreciated.

Still, back to the buildings, which are worth a visit for admiration’s sake — and for the view. The Beach Chalet is located on the second floor of the old Golden Gate Park Visitors’ Center, which had sat vacant for 17 years before its rebirth, and the dining room has a jaw-dropping view of Ocean Beach. The spectacular craftsman-style building was designed by famed SF architect Willis Polk, and features restored art-deco WPA murals with scenes depicting San Francisco life was like during the 1930s. The restoration and reopening of Beach Chalet was completed in the late 1990s, so its not “news,” but the addition of the Park Chalet a couple of years ago upped the “must visit” factor, thanks to a lovely, wind-protected garden patio and massive stone fireplace. Saturday and Sunday afternoons now feature live music, ranging from jazz to funk.

Stay at the Hilton Union Square and you can continue your beer explorations at the hotel’s popular bar, the Urban Tavern.

Next post Traveling Solo: Overcoming Fear with Tips from the Pros

Previous post Bed Bug Alert: What to Know Before You Go