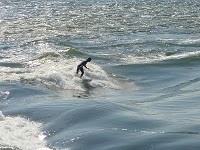 I’d never heard of river surfing until I was planning a recent trip to Montreal. Then suddenly it seemed it was all anyone asked about – “are you going to try surfing the St. Lawrence while you’re in Montreal?”

I confess I was a bit perplexed. As a native Californian, I associate surfing solely with sandy beaches and crashing waves. Rivers are great for kayaking and all, but how do you surf a river?

With great skill and determination, as it turns out. River surfing can happen only in particular locations where a “standing wave” is created by submerged objects, such as rocks. The combination of the rocks and a deep trough creates a backwards-facing wave; to surf it it has to be strong enough to hold you against the current.

Want to see what it looks like? Check out this cool video courtesy of Montreal’s  Fairmont Le Reine Elizabeth, which offers two- and three-day “Surf’s Up” packages that are a great way for first-timers to explore this wacky activity.

Instead of walking out to catch a moving wave, with river surfing it’s the other way around. The wave remains stationary; you paddle out into the river, float down, then — if you’re both lucky and skilled — “catch” the wave and stay with it. 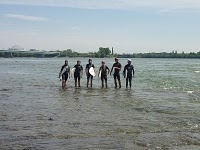 Once on the wave, you can surf as long as you’re able to hold your position; it’s common to see professional surfers riding a St. Lawrence wave for ten or fifteen minutes, turning, gyrating, and doing tricks, while other surfers wait their turn.

The most popular location for river surfing in Montreal is a rather odd spot tucked behind a mod ’60s-era housing development known as Habitat ’67. You change on the green lawn next to the apartments, then slip and slide down the muddy bank to the river’s edge.

Unless you’re a very experienced surfer, though, you don’t do this on your own. You do it under the guidance of Kayak Sans Frontières, an activity outfitter in Quebec led by world-class surfer Hugo Lavictoire. Fun note: Hugo is actually the surfer in the video clip above. 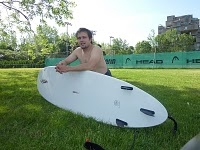 It was early June when I was in Montreal, and the St. Lawrence was running high with winter snowmelt. And cold – even with wetsuits and booties we were chilled, and I noticed many of the serious surfers wore rubberized facemasks! The currents were very strong, Hugo said, so we shouldn’t feel bad if we didn’t get up. In fact, as it turned out, we never even hooked the wave; the best any of us did was to pause in the sweet spot, the dip just before the wave’s crest, before being swept up, over, and headlong down the river. Nevertheless, it was big fun. Just learning techniques for paddling, turning, flipping, and getting on and off the board was enough of a challenge for one day. I had to master fear in order to navigate the strong currents and roaring rapids, and once I did the reward was a series of thrilling rides. 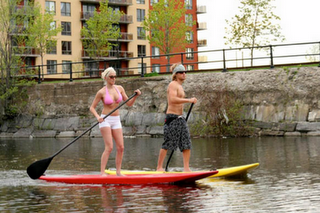 Surfing is by no means the only water sport popular in Quebec; at the famed Lachine rapids in LaSalle, stand-up paddling is a huge draw, especially when the weather gets warm. And the Lachine rapids also boast Big Joe, the world’s biggest standing wave, which draws surfers from around the world.

While Montreal is justly famous for its food and farmer’s markets (more on that later), it’s also a wildly sporty city; in a future post I’ll offer a guide to biking in Montreal, one of the most bike-friendly cities on earth.