Walk On: How Fashion in Scotland Favors Fitness

No sooner had I gotten off the plane in Glasgow than I began coveting boots. Well, actually, boots and coats. Oh, did I mention scarves? In fact, what I wanted was the whole look: A pared-down silhouette that allows Scotswomen to look like models even as they bundle up against the chill. So, I decided to figure out the recipe,  stalking booted beauties as they ambled about the city on a gorgeous fall day. 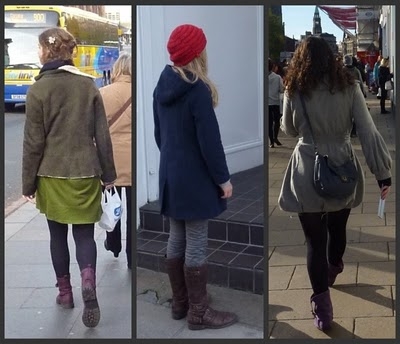 According to my photographic analysis, the walking uniform features five main ingredients: 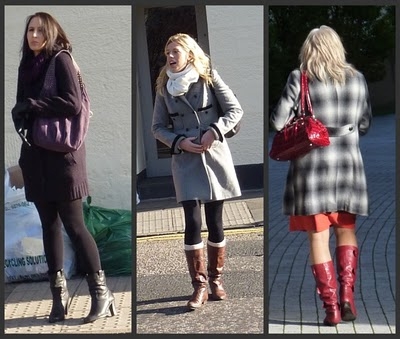 I noticed the trend as soon as I got here, of course (I mentioned in a previous clothes-oriented post that I’m ridiculously fashion-conscious in foreign cities) but at first I  thought the Scotswomen had just developed their own quirky uniform. But once I’d been here a few days, I realized the eminent logic behind this combo; it’s absolutely positively perfectly suited for walking. (In fact, I think fashion-conscious hikers in the states might want to think about tossing their voluminous REI trail pants and heavy boots in favor of this more feminine take.) Here’s why. 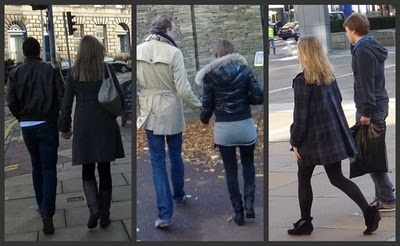 See? Perfect for walking. And the Scottish do a lot of walking. Boy, do they walk. In fact, I’d honestly say, if you don’t like to walk, don’t come to Scotland. You’re not going to like it here. One of my a-ha moments my first day here? Oh, this is where my family gets the walking thing. (My mom was Scottish.)

Not only can you not get around in Scotland without walking long distances, and walking all day, but the Scots take it as a point of pride to disregard distance. “Oh, it’s just a wee bit over there,” was a common response when I asked directions – only to find my destination was actually halfway across town.

And of course, there are reasons for this, too. In the country, you’re likely to look out your hotel window and see a spectacular beach — but you’ll have to go around or across three golf courses to get there. (The Scots do love their golf.) And in the cities; well, think about it. These cities have been here since the 12th century. They weren’t built for cars, and certainly not for parking.

One more thing: I have to say the Scottish are among the thinnest, fittest-looking people I’ve ever seen. (At one point I confess to wondering if Scottish women didn’t favor leggings and tunics simply to show off their skinny legs!)

Although The Scotsman carried a front page story last week decrying rising rates of diabetes tied to rising rates of obesity, I simply didn’t see it. So I went back and checked the numbers, and, well —  that dramatic rise they’re worried about? It brings them to 4.1 percent of the population. That’s not good, of course, but try 8 percent, folks; that’s what we’re dealing with here in the U.S. today, with the CDC estimating that at current rates, one in three Americans will develop diabetes in their lifetime, losing an average of 15 years from their lifespan.

So let’s all buy some tall, rubber soled boots, stretchy leggings and cozy scarves and get walking. We’ll get fit, and we’ll look fabulous doing it.