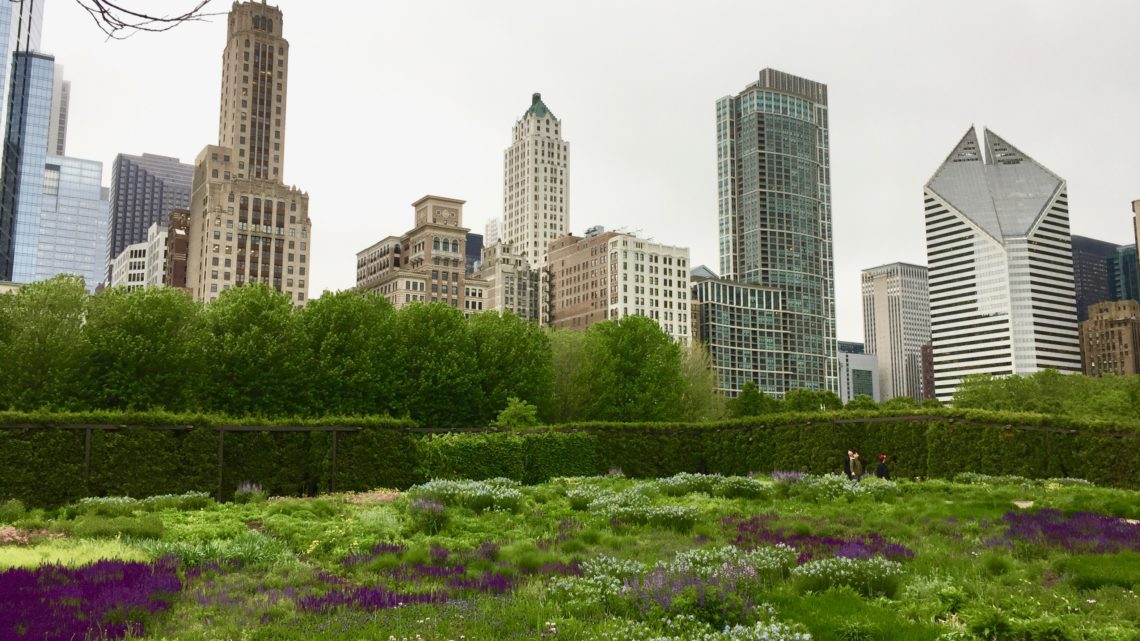 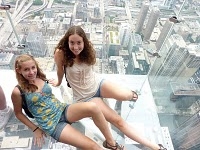 Chicago’s a famously family-friendly town, but many of the top attractions, like Navy Pier and the Shedd Aquarium, are best for school-age kids and lack the “cool” factor that commits something to a teen’s memory banks. Here are ten things to do with teens in Chicago that they a) can’t do anywhere else b) won’t be able to call bo-o-o-r-r-r-ing and c) can use to impress their friends and post conversation-starting Facebook pix. 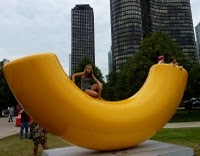 1. Climb some wacky statues.
Chicago has a lot of them, popping up at strange intervals all over the city. Some are grand or just grandiose, others simply odd, but what we noticed is that they are by and large available for climbing — or, at least, there are rarely signs posted saying it’s not okay to climb them.

Go up in a hot air balloon.
Experience the Chicago skyline as it can only be seen from the sky. Rides in a tethered helium-powered balloon are now offered from Navy Pier.  Even better, go up during the fireworks, which happen every Wednesday and Saturday all summer long.

3. See some improv theater.
Chicago is a world-famous theater town – and not just for big Broadway-style shows, though there are plenty of those. Chicago is where actors like the Cusack sibs got their start at the renowned Steppenwolf Theatre, and where famous comedians and actors like Alan Arkin honed their improv skills at The Second City. These companies are still going strong, but for a real taste of edgy, risk-taking theater, there’s nothing quite like a scrappy group called the Neofuturists. Operating out of a funky hall above a funeral parlor in the northern neighborhood of Andersonville, the Neofuturists take improv to a new level with their long-running show Too Much Light Makes the Baby Go Blind, in which they attempt to do “30 plays in 60 minutes” by letting the audience select from a menu of skits and sketches. The actors in the ensemble don’t look to be far out of their teens themselves, and the spontaneity, audience participation, and general zaniness make this show a hit with teens and twenty-somethings. Parents, be prepared to be the only people over 30 in the audience and miss half the topical jokes. 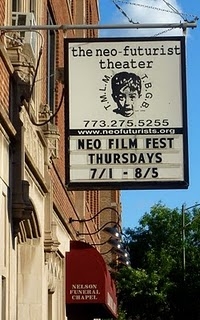 4. Take the water taxi.
A bargain at $2.00 a person, the water taxi is the perfect way to get from Navy Pier to the Magnificent Mile to Willis (formerly Sears) Tower without having to listen to teens whine about being hot and sticky or having sore feet. In addition to great views and a cool breeze, there are often street performers entertaining bystanders at the stops.

5. Go out on a ledge at the Willis Tower skydeck.
The ledges added to the Willis Tower’s Skydeck viewing floor in 2005 have massively upped the appeal of this traditional attraction, known by many teens from the scene in Ferris Bueller’s Day Off. Extending four feet out into the air, the ledges make a perfect platform for publicity-conscious teens, who take their time setting up the perfect eye-tricking picture to post.

6. Eat at the French Market.
Newly opened this year, the French Market has stall after stall with tempting chocolates, pastries, and all types of food. It’s more affordable than eating in a restaurant, and free samples abound. More on this soon.

7. Ride the tall ship Windy.
A restored four-masted trading schooner, Windy heads out from Navy Pier for 60-, 75- and 90-minute cruises that are a great way to see the sights and learn some history too. 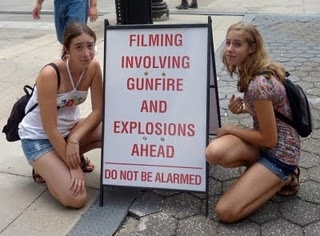 8. Take in a blockbuster show.
Chicago is stop number 2 when big Broadway shows go into repertory, so visitors from other parts of the country can see shows that may not come to their cities for years to come. Last week we saw Billy Elliot in the Ford Center for the Performing Arts, a restored art deco showcase rococo with gilt mermaids and dancing maidens reminiscent of ancient Siam. For one evening, my Glee-fanatic girls and I were united in musical mania.

9. Watch a Hollywood film shoot.
Now this one is, of course, subject to the whims of fate. But Chicago is a big, big town for location filming so your chances are pretty good. More than 60 films have been shot here in the past ten years and at times it can seem like the entire city is one big film set. When we were in Chicago, Transformers 3 was being shot, and the whole riverfront had been turned into an apocalyptic disaster site.

10. Where to stay while doing all this? The Fairmont Milennium Park is close to all downtown activities and attractions and the elevators are fun to ride, too.

Things To Do
Chicago
Tags: active travelChicagotheaterwhat to do

Next post Welcome to the Hotel California, Todos Santos

How to Stay Fit and Healthy When You Travel