Rows of Empty Beach Chairs Line Ixtapa/Zihua Beaches: Are They Calling to You? 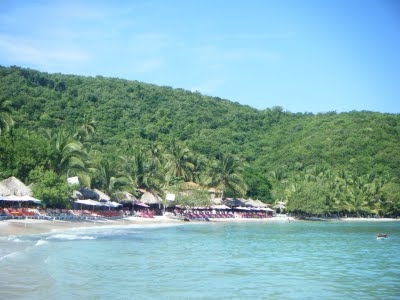 Mexico’s had a really hard time lately. In fact let’s be honest; this poor country’s gotten a really bum rap. Crime wave? It was limited to a few border cities most Gringos rarely visit. Swine flu? It turned out to be worse in the states. The last thing they needed was a hijacking — which, by the way, happened in the Mexico City airport at exactly the same time that my plane from San Francisco landed there.

There they were on the tarmac, troops in full riot getup with machine guns on alert; they were the first thing I saw when we got off our plane. There was no mistaking the fact that something was going on. But I wasn’t particularly scared, and neither, it seemed, were the many other people waiting calmly for their flights to be rescheduled or resumed. There was no panic, no frantic phone calls home. We had faith that everything would be under control and we’d be on our way, and within a few hours we were.

So here I am on September 11, 2009, to tell you that Mexico is safe — I should know. And if you have any flexibility available in your life at all right now, you might want to head on down to Zihuatanejo-Ixtapa, where that beach lounge you usually have to fight for is waiting, forlorn and unoccupied. In fact rows and rows of them are waiting, as you can see in this photo of Playa Las Gatas, a powder-white sand/turquoise-water beach just a short boat ride from the fisherman’s pier in downtown Zihua. The servers are also waiting; so are the cooks, the fishermen, the boat captains, the hotel staff. They’ve taken really good care of us for many years; don’t we owe them something now?

Let me put this in perspective; two years ago I tried to plan a trip to Zihua with my daughters and gave up, after getting “sorry, we’re full” messages from all the hotels I most wanted to stay at. Well, right now there’s almost no one here. Which means you have the chance of a lifetime to experience one of Mexico’s most gorgeous and popular destinations without competing with crowds of fellow travelers.

And with the streets quiet, the beaches empty, the restaurant tables vacant, you can experience real Mexican culture with no pressure to get away from your fellow gringos. Basically, it’s a brief chance to turn back the clock and experience Zihua as it was before it was “discovered.”

More trip-planning details in the next post, but in case you’ve got a long weekend to spare, check those flights. Your room with 180-degree Pacific view and beach lounger are waiting.